In 2014, the Hopscotch Design Festival was born to bring designers together to discuss local initiatives, listen to national speakers, and enjoy some music. Matthew Muñoz is a cofounder of the design portion of the festival, believing music and design are fundamentally linked—one inspires the other.

The festival, which now boasts 40 local and national speakers, and more than a hundred musical acts has increased attendance year over year. This popular festival in Raleigh, North Carolina, which is becoming a popular design hub, is attracting not only local designers and social innovators, but people from around the country.

Muñoz is the type of person who likes to get things done. At the AIGA conference in 2007, he was runner-up in the first ever Command X competition, which not only tests design solving capabilities and execution, but it’s a test in endurance, as contestants often work round the clock on their design solutions. At only 36, he’s chief design officer and partner at New Kind in Raleigh, he’s past president of his local AIGA chapter, and he serves on the national board of directors for  AIGA.  He believes in service for the better good of his community. Here, we talk to Muñoz about the Hopscotch Design Festival and what it means to him and the people who attend, as well as the work he does at New Kind.

What were your expectations going in to the first ever Command X competition? Were you surprised at how grueling the process was?

Since it was the first year of Command X, I had no idea what to expect. I assumed the other contestants would be talented, the projects would be challenging, and overall it would be a fun experience. Command X didn’t disappoint. Looking back, it was just as grueling as my then day-to-day in grad school at NC State.

Having all of the attendees work in the fish bowl—where anyone could see what we’re up to— was a blast.

Lots of support and joking around. I still follow some of the past Command X designers — they’re doing stellar work. It takes something to put yourself in the middle of the fray like that — always interesting to see what they’re up to.

Tell me a little about New Kind and what you do there.

The five partners at New Kind all worked together to build the brand and cultures at Red Hat, the leading open source technology company. We started New Kind to apply the open, collaborative, community-oriented approach to other projects and for other organizations. We wanted a way to create brand and culture that could be interactive and effective — where everyone participates and the best ideas for developing brand and culture win.

Nearly eight years later, we work primarily with companies (especially those who are technology-minded) who are inventing or reinventing themselves. During these times, we believe in using storytelling and design thinking methods to help a group of people see the next step of their organization’s invention. When we help people articulate a future vision, company story, brand position, or brand identity — they get a glimpse of what could now be possible for themselves as an organization. The future becomes real, tangible, and even more possible.

One example is for the tech company Avid, which makes tools that broadcast the Olympics, that Beyonce uses to create music, that filmmakers use to make the Avengers. This is big-time stuff! When the brand team was looking to create the next chapter of the Avid brand, we helped them design a two-day Summit. This experience would not only uncover next steps and collective vision for the visual and verbal brand voice, but also create common ground among the 15-person team. We designed surveys to get feedback and activities designed to surface the current and futures states of the brand.

Give me a little background on the Hopscotch Design Festival. Was there a music festival first, then you did the design component?

It was 2009, the founding year of Hopscotch Music Festival, and I’m standing in the middle of the street in downtown Raleigh. Surrounded by a mob of people, we all watched Broken Social Scene perform “World Sick” outdoors at sunset. The city was so alive in that moment. Thirty-minutes later we bounced around to different shows, seeing big bands, local bands, and groups that would quickly become favorites. It was three days jammed with over a hundred musical acts.

In 2014, we added the Design Festival. Designers love music. We listen to fuel the creative process. We thought the local design community would be open to an idea festival with the same elements of urban experience, discovery, and camaraderie that the music festival brought.

How did you make it happen?

Jonathan Opp, fellow music-loving AIGA Raleigh President, and I thought a design week would give voice to the local talent in the design community. One of Raleigh’s City Councilors, Mary-Ann Baldwin, thought we should talk to Hopscotch Music founder Greg Lowenhagen about what we might do together.

We met, and it was clear that we could create a world-class event in our town. Creating a temporary space where the best creative minds would share in the knowledge and networking, process and ideas, immediately relevant to each of our crafts. My crew at New Kind produces most elements of the festival. That effort is led by the director, New Kinder Marie Schacht. Co-founders Greg and Jonathan help organize and plan the event. I’m very involved in lots of ways, from curation to community-building to format and experience. 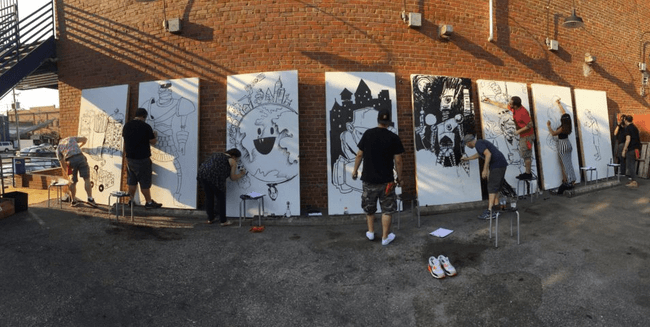 What advice would you give to designers who want to see changes in their cities—from a cultural and business perspective?

Find the like-minded people who want to see the same changes—from neighbors to city leaders. Through conversations you can seek out the things that would make a difference for your community. Collectively you can all create experiments that are worth testing (and funding) in your own city.

Why is the music component so important?

It offers another way to experience creative expression and play — which we all know is necessary for creation.

Are most attendees local, or are people traveling from other areas to attend?

Our goal is to always keep it pretty balanced between local and visiting people. We have a growing amount of folks traveling in. We always have speakers from around the nation and world.

What have you personally done to improve your community?

I’m active in a variety of ways, from leading AIGA Raleigh as the President, to my current national board role, to assisting various organizations through helping them invent or reinvent themselves through our work at New Kind.

Overall, I focus on empowering people, aligning groups, and facilitating their collective journey toward creating their future. 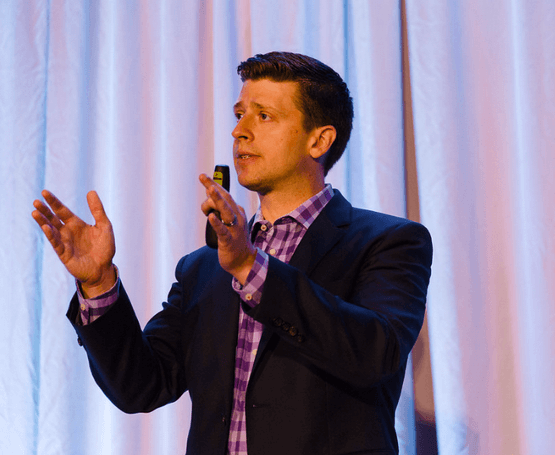 Do you have a favorite event/speaker—someone who’s message really moved you?

I’m always on the move during the festival, popping in and out of speakers and venues. I love that I get to be in one place and see so many flavors of design. If there’s one overarching theme, it’s that we can all form the future of nearly everything with intent. If I have to choose though — this year I loved how Dan Heath, best-selling author of Made to Stick, talked about how memories work and how to design moments.

On a personal note, you got married a couple years ago in Alaska at the end of November. Most people go to tropical islands, and you and your bride went the opposite extreme. Why?

I did my first marathon in Alaska—I was going for something adventurous. I was dating Lara at the time, and it was early on. She surprised me at the finish line! Alaska is such a unique and wild place. From that point on, it’s been a special place for us. So we eloped there, standing in the snow, surrounded by torches under the Northern Lights saying our vows. Lara and I wanted to create something that was all us.

The Rules According to Snask

When Fredrik Öst and Magnus Berg formed their design collective Snask, they were a...

Robert Smigel: The Man With the Dog Puppet Fist

News coverage of the 2016 Presidential Election was overbearing and underwhelming. Late night television...

From a young age, James Victore wanted to be a poster designer—make that THE...